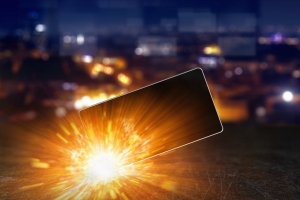 We’ve all seen the news stories about batteries catching fire; from smartphones to vape cigarettes. With that in mind, it’s a surprise how many don’t consider the hazard of combusting batteries when they throw an old technology item away.

Quite often phones, laptops and tablets are thrown away rather than being recycled properly. We’re usually reminding consumers about the hazard they pose to the environment, but rarely do we mention the danger of combustion.

The Danger Of e-Waste

In 2017 in California, the state blamed an astonishing 65% of fires at waste facilities on redundant technology. With such staggeringly high statistics, they have launched a campaign to raise awareness. It’s likely there are factors like warm weather contributing to this, but it doesn’t mean we’re exempt from the same issues here in the UK.

Last year in New York a waste collector was put at risk as a battery exploded; this happened as the truck began to crush the waste together to make more space. Something that could easily happen here in the UK.

Airlines around the world were quick to ban the use of mobile phone brands and models which were notorious for catching alight. Although the issue was resolved and devices were replaced it’s not uncommon.

Charging Your Phone at Night

Millions of mobile users keep their phone by the bed at night, or even under their pillow; however, this can have fatal consequences. It’s now advised that consumers don’t leave phones on charge overnight in case they catch fire. The plug can even catch alight when it’s left plugged in, switched on but with no phone attached.

Here at Recycle You Tec will keep these harmful items out of landfills by recycling them in Africa, Asia and less fortunate companies for a second home, not only do we do this, we also pay you for these items, unlike most recycling companies who ask you for money.

This blog is completed by ALM Wholesale LTD.

Neil Harris
16:51 04 Dec 18
I have been dealing wit Sam for nearly 5 years now, he can't be faulted. Always reply's to any questions within minutes... by email. Very easy to talk too on the phone. We have bought hundreds of laptops at this stage for our two stores. Laptops come individually packaged to a high standard. If there is ever a small issue Sam always resolves it very easily. Cannot recommend them enough!read more
See All Reviews
Battery Life Tips