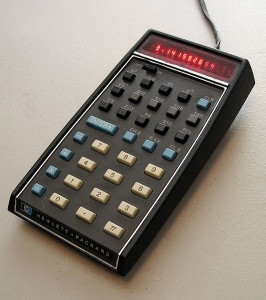 Hewlett-Packard introduced the first handheld scientific calculator, the HP-35. The precision of the calculator was greater than most mainframe computers of its time. For such a technological achievement, the name of the calculator is simply derived from the fact that it has 35 buttons.

In about 1970 HP co-founder Bill Hewlett challenged his co-workers to create a “shirt-pocket sized HP-9100”. At the time, slide rules were the only practical portable devices for performing trigonometric and exponential functions, as existing pocket calculators could only perform addition, subtraction, multiplication, and division. Introduced at $395 (equivalent to $2,366 in 2018), Like HP’s first scientific calculator, the desktop 9100A, it used Reverse Polish Notation (RPN) rather than what came to be called “algebraic” entry. The “35” in the calculator’s name came from the number of keys.

The calculator used a traditional floating decimal display for numbers that could be displayed in that format but automatically switched to scientific notation for other numbers. The fifteen-digit LED display was capable of displaying a ten-digit mantissa plus its sign and a decimal point and a two-digit exponent plus its sign. The display used a unique form of multiplexing, illuminating a single LED segment at a time rather than a single LED digit because HP research had shown that this method was perceived by the human eye as brighter for equivalent power. Light emitting diodes were relatively new at the time and were much dimmer than high-efficiency diodes developed in subsequent decades.

The calculator used three “AA”-sized NiCd batteries assembled into a removable proprietary battery pack. Replacement battery packs are no longer available, leaving existing HP-35 calculators to rely on AC power, or their users to rebuild the battery packs themselves using available cells. An external battery charger was available and the calculator could also run from the charger, with or without batteries installed.

Still widely used today, By definition, a scientific calculator is a calculator designed to help you calculate science, engineering, and mathematics problems. It has way more buttons than the standard calculator that just lets you do your four basic arithmetic operations of addition, subtraction, multiplication, and division.

Have you ever got the hang of using one? I know I’ve not.

While our partners at Recycle Your Tec wouldn’t necessarily recycle these items, they do accept redundant IT such as Laptops, PC, TV, Tablets and more, why not check them out at www.recycleyourtec.com

Neil Harris
16:51 04 Dec 18
I have been dealing wit Sam for nearly 5 years now, he can't be faulted. Always reply's to any questions within minutes... by email. Very easy to talk too on the phone. We have bought hundreds of laptops at this stage for our two stores. Laptops come individually packaged to a high standard. If there is ever a small issue Sam always resolves it very easily. Cannot recommend them enough!read more
See All Reviews
10 Of The Best Android Applications of 2018

The right product for you.
Scroll to top